Both Wall Street and Main Street are continuing to keep a weather eye for any indication from the Federal Reserve about future interest rates. Let’s review what the Fed’s duties are and how it discharges them.

The first two goals are commonly referred to as the Dual Mandate. To balance these three goals the Fed sets its monetary policy. Its primary tools for effecting those policy decisions are: 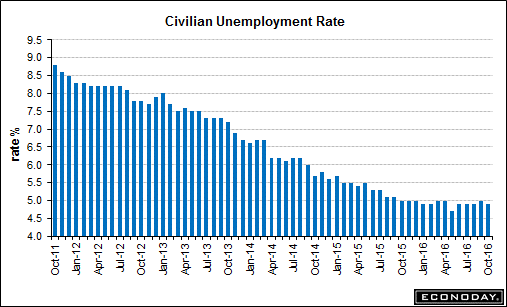 At 4.9 percent in October, headline unemployment is in sync with the Fed’s target. More about the employment situation below.

While current inflation falls below the Fed’s target, note that Core PCE is at a two-year high and trending higher. Several factors may be portending rising prices: higher wage rates (see below), rising commodity prices, and a healthy uptick in GDP. After years of encouraging inflation through historically low interest rates without success, the Fed may be getting what it has been aiming for.

In addition to these two primary measures, the Fed considers a wide range of key metrics including those followed quarterly by TrendTracker:

But personal consumption’s rise was only half of its 2Q rate, and a jump in soybean exports is unlikely to recur. New residential construction, falling by a 6.2 percent rate, also pulled GDP down by 0.2 points.

Economists predict that 2016 will end at less than a 2.6 percent growth rate. That performance continues a streak of below 3 percent growth stretching back to 2005. One solid quarter does not constitute a new, healthier trend in GDP.

Retail Sales
Healthy consumer spending fueled a healthy 0.6 percent rise in September’s edition of this important metric. Up 1.1 percent, auto sales bounced back from last month’s 0.3 percent decline. Year to date, however, car sales are down from the 2015 peak. Positives for the wood products industry were improvements in furniture and building materials sales, up 1.0 and 1.4 percent respectively. 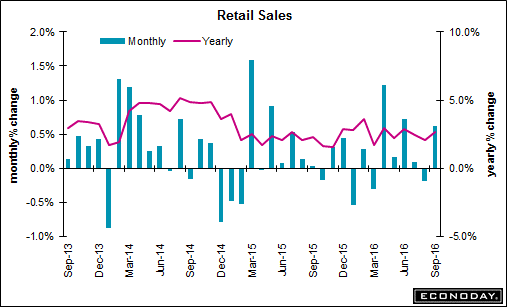 Employment
Strong retail sales provides a boost to GDP and also signals a healthy labor market. As noted above, the headline unemployment rate of 4.9 percent accompanied by a 0.4 percent rise in average hourly earnings highlighted the October Employment Situation report. Average hourly earnings, which impact prices and hence inflation, have risen by 2.8 percent over the last year. Non-farm employment increased by 161,000 jobs, and the labor force participation rate came in at 62.8 percent, up only 0.3 percentage points over the last twelve months.

Remember that the headline rate (U-3) considers only those persons seeking a job. A broader measure of unemployment, known as U-6, includes those not working, not seeking a job but available for work, having looked for a job within the last twelve months plus those employed part time but who want full-time employment. In October 7.6 million persons fell into those categories not included in the headline rate, and U-6 came in at 9.5 percent, down from 9.7 percent the prior month.

From the JOLTS report, September Job Openings totaled 5.486 million, up slightly from August. Layoffs & Discharges at 1.474 million decreased a solid 218,000 from the prior month. Companies are seeking more workers and retaining those who are already employed. 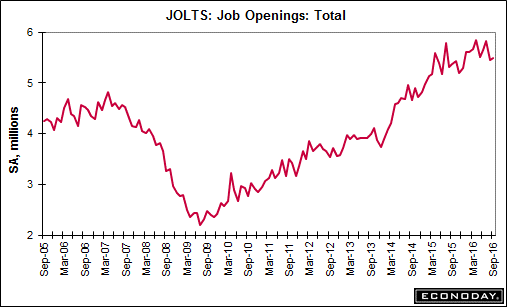 Rising wages, particularly in manufacturing, are also the result of higher tech machinery and processes that demand a more educated workforce. In 2000, 53 percent of manufacturing workers had a high school diploma or less. Over the next 15 years that share dropped by 9 percentage points while the share with a college or graduate degree rose by 8 percentage points. This year, for the first time, college graduates outnumber workers with a high school education or less. With two unemployed manufacturing workers for every open factory job, a huge pool of raw manpower is available for up-skilling. Re-shoring manufacturing to the U.S. will never materialize without strong re-training programs. To ensure that workers are taught relevant skills, private sector businesses must get involved.

The lack of skilled workers may be hindering a stronger recovery in the manufacturing sector. In October the ISM Manufacturing Index came in at 51.9, just above neutral territory. This weak performance was driven by lower new orders, which softened to 52.1 versus 55.1 in September. At 45.5, backlog orders also contributed to the contraction by coming in below 50 for the fourth consecutive month. New export orders grew by half a point to 52.5 while production jumped 1.6 points to 54.6. Factory employment moved into positive territory at 52.9. While considered moderate, growth continues to be respectable in this critical sector. TrendTracker predicts improvement in the last two months in 2016. 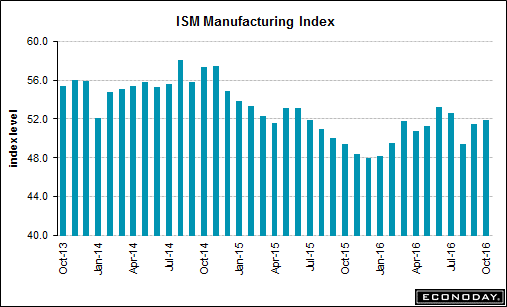 Hardwood producers depend on the housing sector, so the headlines from the September Housing Starts report were frightening. Starts plummeted by 9.0 percent to a 1.047 million annual rate. Digging deeper into the numbers revealed that the decline was caused by a 38 percent drop in the multi-family category. The critical single family sector thankfully rose by 8.1 percent. 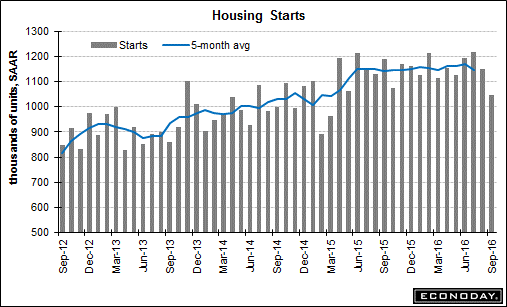 The good news is that Permits are up 0.4 percent for single family and 17.0 percent for multi-family. Combined, the rise in Permits to a 1.225 million rate is well above the August number and back on track for a healthy 2016 for this important economic sector.

New Home Sales, up 3.1 percent in September, should maintain homebuilders’ optimism. Year-on-year sales are up 30 percent. The median price was up 6.7 percent for the month. The decline in new home inventory to only 4.8 months of supply, however, will negatively impact on sales. Builders need to “put up some sticks” to keep the stream of cabinets, flooring, and hardwood millwork flowing. 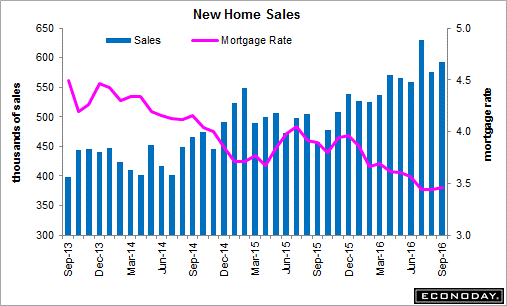 Demand from the remodeling of existing homes continues as Existing Home Sales remain slow but steady. Up by a total of 0.6 percent in September, single-family sales rose by 4.2 percent while being offset by a decline of 3.2 percent in condos. The supply of 2.040 million units for sale fell from 4.6 to 4.5 months. Other highlights include a record low for sales of distressed properties to 4.0 percent of all transactions and the strong interest from first-time buyers as rental rates rise. 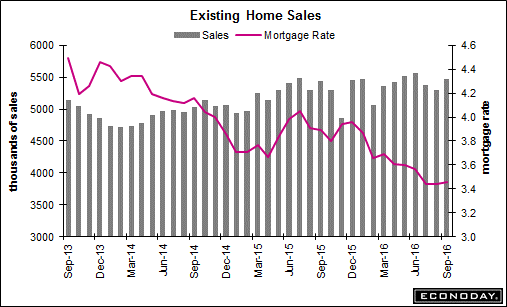 Bottom Line: Will the Fed move interest rates higher in the near term? The unemployment rate is at the high end of the Fed’s target range for that metric. Notwithstanding the skills gap, some slack remains in labor supply. The inflation rate is nearing the Fed’s 2 percent target. An output gap persists between the current and potential levels of GDP as aggregate demand remains below supply. The combination of those facts would argue that the economy is not yet overheating - the traditional condition for a rate increase. On that basis, TrendTracker predicts the Fed will postpone a rate uptick until inflation exceeds its target.

Footnote: Given the surprising outcome of the recent election, no one can yet predict with certainty the impact of the new administration’s programs on our economy and your business. Keep your fingers crossed that job growth will be a primary focus of the new administration. Such a program, if properly designed and executed, will put money in people’s pockets, especially those who are now working part time and those who are jobless but want to work. Turning people into consumers is a good start to a healthy economy. Stay tuned…