Seven years after the Great Recession officially ended in June 2009, the U.S. economy continues to limp along at a historically low pace. Gross Domestic Product – the broadest measure of economic health – has averaged only 2.1 percent during that period making this recovery the weakest since 1949. Is this weak performance the new normal? Is the economy stuck at that level, preparing to resume a more historic growth rate, or ready to roll over into recession? In either case, the Federal Reserve System is facing a critical quandary on how best to fulfill its dual mandate of maximizing employment and stabilizing prices.

The problem is the current, abnormally low federal funds interest rate. Typically the Fed uses the level of that rate to control the tempo of the economy by raising the rate when excessive inflation appears, and lowering the rate when growth wanes. As we know, the current rate is near zero and has been for seven-plus years. Thus the Fed has little room to cut the funds rate if the economy weakens. A rate increase to provide some wiggle room may threaten the low growth we are experiencing. Either way, the Fed is caught in a perilous balancing act.

While the Fed’s mandate does not include optimizing the U.S. dollar exchange rate, our interest rates versus those set by key trading partners impact our currency’s value. Higher rates here, compared to the Euro and the British pound sterling for example, make the dollar more expensive and thus adversely impacts our exports. Note that in early August, the Bank of England slashed the benchmark interest rate to 0.25 percent, the lowest in its 322-year history. Worse yet, central banks in the Eurozone and Japan are charging negative interest rates on commercial banks’ excess funds, the first time that situation has occurred in the 5,000-year economic history of the world, with no significant improvement in their economies.

No one knows with certainty how healthy growth can be re-started. The past seven years have taught us a hard lesson: Central bankers like the Fed can’t fix the world’s economies with monetary policy alone. A better economy demands wise leaders to aid the Fed with prudent fiscal policy.

Is Good News Hiding in the Economic Weeds?

According to some economists, encouraging spots are showing up in the latest economic news, but require a deeper dive into the data to reach that conclusion. Can these improvements be signs of sufficient growth to remedy the Fed’s quandary?

Let’s look first at the 2Q2016 Gross Domestic Product that came in up only 1.2 percent, well below the historic norm. This poor performance included a 1.16 percentage point reduction in inventories. A decline in inventories negatively impacts current GDP, but is generally a plus for the future economy. Low inventories must eventually be replenished, which will require more workers. That’s a positive sign for the future. 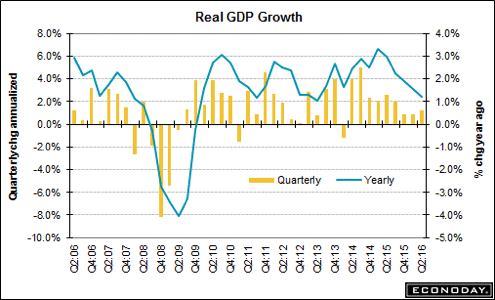 Another important plus was consumer spending’s 2.83 percentage point contribution to 2Q GDP growth. Retail Sales in June jumped a solid 0.6 percent over May’s number. The consumer sector did its part in the last quarter to keep the economy growing. 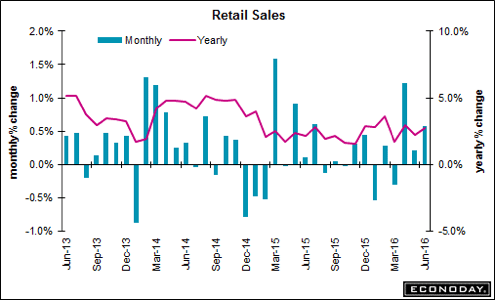 Strong consumer spending evidences a healthy job market, and indeed the July headline unemployment rate remained at 4.9 percent, a level which some economists call full employment. More people are now in the workforce as evidenced by the July rise in the labor-force participation rate. Businesses at the end of June had 5.5 million Job Openings to fill, an indication of continuing demand for labor. Early August Initial Jobless Claims remain near historic lows, and in this year’s first six months, the economy added about one million jobs. With wages up 2.6 percent from a year earlier, workers have more cash to spend – another positive sign. 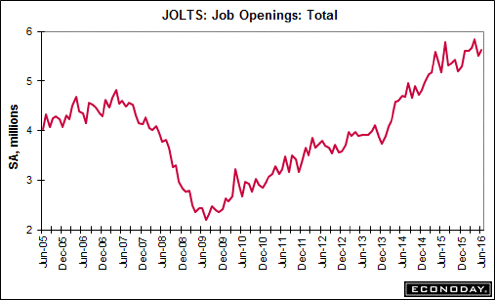 Strength can also be found in the July ISM Manufacturing Index that came in solidly in positive territory at 52.6. The new order component of this metric scored a strong 56.9, which points to future hiring of additional workers. 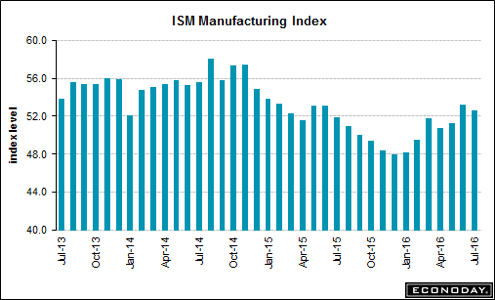 Housing is also contributing to growth. Starts rose by 4.8 percent in June. For the second quarter, starts averaged an annualized run rate of 1.16 million, a 0.8 percent gain over the prior quarter. New Home Sales surprised the experts in June, coming in at a 592,000 annualized run rate, 25 percent higher than June last year. The median price of a new home has risen 6.1 percent from a year ago. With this recent sales growth, the inventory of new homes fell below equilibrium, to a 4.9 month supply. That level of supply will encourage builders to start more houses. 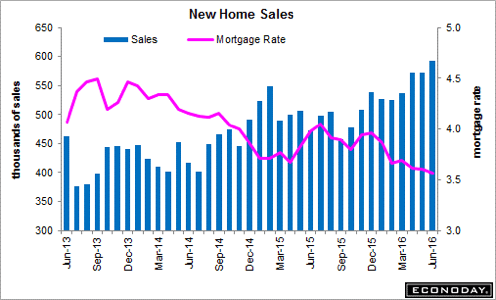 In June, Existing Home Sales rose to a 5.57 million annualized run rate, a 1.1 percent gain over May’s performance and the best number since February 2007. The median price increased only 3.7 percent year-on-year. The inventory of existing homes on the market declined to 2.12 million, a 4.6 month supply. Hopefully rising prices will motivate existing homeowners to list their houses for sale, to move inventory closer to equilibrium with demand.

No doubt, the strength of the housing sector points to a healthier economy. Only people with jobs buy homes.

But What About Productivity?

So the metrics that indicate the health of the labor market – wage growth, consumer spending, housing demand, initial jobless claims, and labor-force participation – are strong. Why then is GDP growth lingering well below pre-Great Recession levels? Shouldn’t all those new workers be making a positive contribution to the economy?

Before the 2008-9 Recession, the historical relationship between GDP growth and employment would have projected 400,000 new hires during the first half of 2016, rather than the one million jobs actually recorded.

Economists suggest the problem is a serious decline in Labor Productivity. Workers are putting in more hours, but output is not increasing proportionately. Indeed, non-farm business productivity dropped 0.5 percent in 2Q2016, the third consecutive quarter of weakness in this critical measure. That’s the longest streak of declines since 1979.

When combined with recent increases in average wages, a drop in productivity translates to an increase in unit labor costs. Compared with 2Q2015, unit labor costs were up 2.1 percent in this year’s second quarter. Continuation of such a cost increase crimps business profits and threatens higher price inflation – both negatives for our economy.

Healthy labor productivity requires two elements: investment in plant and equipment and well-trained workers. The former has declined for three consecutive quarters. In the uncertainty surrounding our economic prospects, businesses have chosen to delay investing in labor-saving technologies and preferred to substitute labor for capital. Such behavior, however, is not a long-term strategy for success.

Bottom Line: If it’s not one thing, it’s another for our economy. We can’t get all eight cylinders firing in proper sequence. In the six decades from 1948 through 2007, our economy grew at an average annual rate of 3.5 percent. One common denominator during that period was a general optimism among businesses and workers, supported by a sense that we were all in this economy together. Until we regain this confidence by working collectively to implement a plan that achieves the common good, our economic engine will continue to misfire.

Chinese Furniture Exports Surge
Reports of the decline of the Chinese furniture industry, due to rising labor costs, appear greatly exaggerated. According to Furniture Today, China remains the number one source country, with 2015 shipments of $13.7 billion to U.S. wholesalers and retailers, up 12 percent from 2014. That’s a 57 percent share of all furniture imports, and more than four times the shipments from number two Vietnam.

This export boom was achieved by a work force that is less than 30 percent as productive as those in mature, developed countries. At most furniture companies there, opportunities to improve productivity are plentiful: installation of multi-function processing machinery, adoption of lean methods, skills training, and implementation of better execution systems, to name a few. Shrewd investment in proven, existing technologies will enable the better-managed Chinese furniture makers to retain their current rank of number one in top source countries.

Strong Forecast for Remodeling
Higher spending on remodeling means more demand for cabinetry, flooring, windows, doors, trim and other wood products. According to Harvard University’s Center for Housing Studies, by mid-2017 annual home improvement and repair spending will reach $321 billion, up from $297.3 billion at the end of 2Q2016. When adjusted for inflation, that performance nearly reaches that sector’s peak, last achieved in 2006 before the housing market crash. The primary driver is the healthier housing market, with current owners preparing their homes for sale and new owners upgrading their purchases.