Two consecutive quarters of 3 percent GDP growth hint of a stronger economy, but uncertainty remains. Gross Domestic Product, the broadest measure of goods and services produced in the U.S., expanded by a 3.0 percent annual rate in 3Q2017. Adding in the 2Q’s 3.1 percent growth gives the economy its best six months since mid-2014. 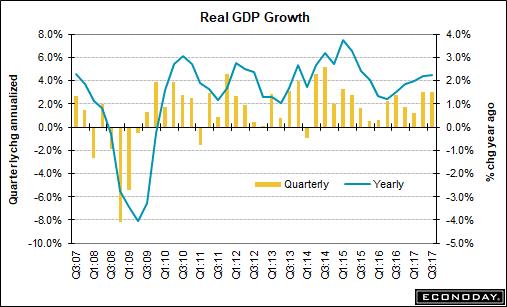 Are we breaking out of the sluggish growth that has marked this eight-year expansion? As always when forecasting the economy, caution is warranted. Remember that a six-month episode of 5 percent growth occurred in mid-2014 only to revert to the 2.2 percent annual average experienced since then.

This time however, consumer confidence as reported by Gallup’s Economic Confidence Index is positive. Americans have been more upbeat about the economy in 2017 than in any year since the Index was created in 2008. Until the 2016 presidential election, the Index was routinely negative. This change in sentiment is driving purchases of household durable goods like cars and kitchen appliances, which jumped at an annual rate of 8.3 percent in 3Q. Businesses joined in with an 8.6 percent increase in plant and equipment investment.

Some economists also claim that a portion of the recent growth is coming from the net positive impact of Hurricanes Harvey and Irma. The Commerce Department estimates that $102 billion of insurance payouts will eventually be pumped into repairs and rebuilding.

A weak spot in 3Q was residential investment, which fell by 6 percent. More on that category in the discussion on the housing sector below.

This economic strength, combined with the latest employment situation, raises the odds of an increase in the federal funds rate by the Federal Reserve. Arguing against an uptick is the fact that inflation remains below the Fed’s 2 percent target. Keep your eye on the Bureau of Economic Analysis’ monthly Personal Consumption Expenditure Price Index (PCEPI) for a sign that the Fed may increase that rate.

Employment
Slow growth has not stopped job creation. In October, the headline Unemployment Rate (U-1) fell to a 17-year low of 4.1 percent, down from 4.7 percent a year ago. The job market is now well below the 4.6 percent rate that the Federal Reserve considers full employment. 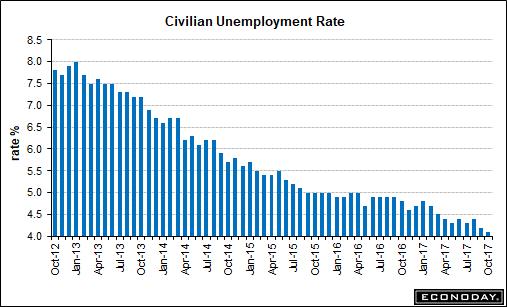 As importantly, the Total Unemployment Rate declined to 7.9 percent, down from 8.3 percent in September. This metric, known as U-6, includes a broader definition of employment status and is the most accurate measure of the unemployed.

Over the last twelve months, 4.5 million people have taken a job. The Employment-Population Ratio moved up by 0.5 percent over the year to 60.2 percent. The Labor Force Participation Rate remained virtually unchanged over the last year at 62.7 percent.

In addition, according to the Initial Jobless Claims report, the four-week average of persons filing new unemployment claims during the first week of November fell to the lowest point since March 31, 1973.

In the manufacturing sector, the average workweek increased to 41 hours in October, and companies added 24,000 new hires. Over the past year manufacturers hired 156,000 new workers. Total manufacturing payroll is 12.5 million, the highest since January 2009.

In further evidence of the high demand for workers, the JOLTS report for September showed openings rising slightly to 6.093 million and hirings little changed at 5.273 million. At 820,000, the difference between openings and hirings is off the charts. The magnitude of this gap indicates that employers are unwilling to offer a wage high enough to fill the jobs and/or are finding a scarcity of people with sufficient skills. 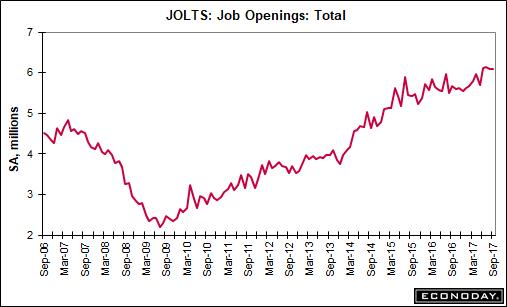 So far the tight labor market has yet to ignite inflation beyond the Fed’s 2 percent annual target. However, without doubt the data in the GDP, Employment Situation, and JOLTS reports have increased the probability of a Fed rate increase.

The big questions facing businesses of all sorts are (i) where will the new workers required to support growth come from and (ii) what wage rate will be sufficient to attract them.

Manufacturing
The October ISM Manufacturing Index came in at 58.7, only slightly below September’s 60.8 that was a 13-year high. 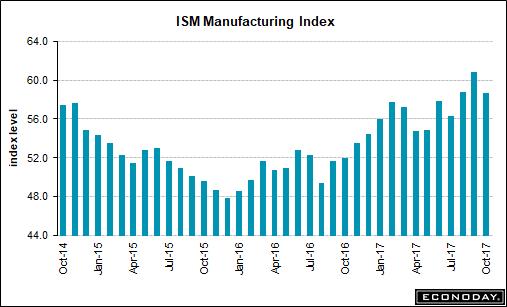 Strength was seen in new orders at 63.4, exports, and employment as reported above. Backlogs continue to build. Indicating the breadth of this strength, 16 out of the 18 industries included in the Index reported growth last month.

Along with October’s significant hiring, the Index illustrates a manufacturing sector poised for continued growth.

Housing
All is not roses, however, as the housing sector continues to report less-than-stellar numbers. September Housing Starts, including single-family and multi-family units, fell to an annualized rate of 1.127 million, 4.7 percent less than August’s already weak performance. Portending future weakness, Permits for new construction fell 4.5 percent to 1.215 million.

By comparison housing experts estimate that the equilibrium annual demand is about 1.5 million units annually, a number that keeps up with household formations. In spite of the strong economy and job market, this important sector remains at about 40 percent below its 50-year annual average.

The important single-family category provided the only bright spots in September. Permits rose by 2.4 percent from August and 9.3 percent year-on-year. Completions increased by 4.6 percent to a 781,000 rate. 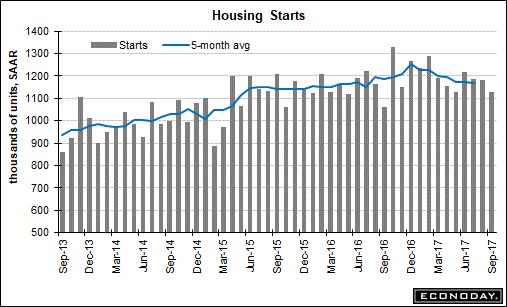 Permits for multi-family units plummeted to 396,000, down 16.1 percent versus August and 24 percent over the last 12 months.

As illustrated by the chart below, New Home Sales have shown historic volatility in 2017. Following an abysmal performance in August, sales jumped by 18.9 percent to an annualized rate of 667,000. That’s the highest single-month percentage gain in 28 years.

Unfortunately the sales surge reduced the inventory of homes for sale to 279,000, only five months of supply. In response, the median price for a newly-built house rose 5.2 percent to $319,700. 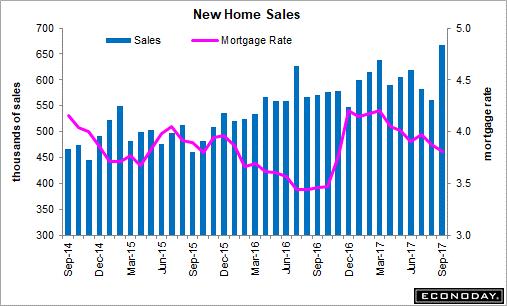 September Existing Home Sales provided a bright spot by posting their first gain in four months to an annualized rate of 5.390 million, up 0.7 percent. Overall sales are down 1.5 percent compared to last September.

In September, buyers demanded discounts thus pushing the median price down to $245,100, a 3.4 percent decline. Over the last twelve months prices are 4.2 percent higher.

First-time buyers accounted for 29 percent of sales in September, down from 31 percent in August and 34 percent a year ago. That number matches the lowest share since September 2015.

The supply of existing homes for sale remains tight with only 1.9 million resales on the market. That’s only a 4.2 month inventory. Realtors claim that a healthy inventory is 6 months of supply. The inventory of mid-priced homes is reported to be only three months. 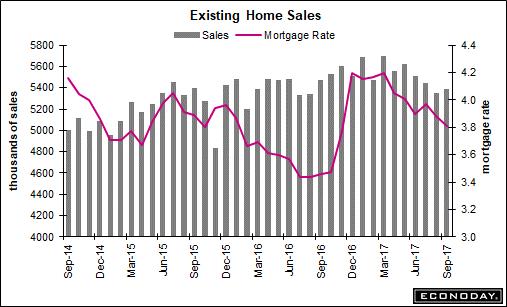 Low inventories and higher prices of homes on the market are only two factors contributing to slow sales. As tracked by the National Association of Realtors, the mobility rate of homeowners has declined to a 30-year low. The median time of residence in a home is currently 10 years, the longest since 1985 when the NAR began tracking this metric. People are simply choosing to stay put.

As reported in the August TrendTracker Update, low mobility is generating a booming home renovation market. The Harvard Joint Center for Housing Studies predicts an annualized growth rate of 6.4 percent in remodeling this year and 7.7 percent in 2018. With average home prices increasing about 5.6 percent annually, it’s an easy decision to invest in renovation in lieu of relocating. Lots of hardwood products like cabinetry and flooring are popular components of remodeling projects.

In spite of the tight market, the homeownership rate rose to 63.9 percent in 3Q, up from 63.5 percent a year ago. That’s the highest level since 2014, but well below the historic norm of about 65 percent.

Unfortunately high prices are keeping many first-time buyers on the sidelines. However, the Census Bureau recently reported that the number of homeowners increased by 755,000 from a year ago, while the number of renter households declined by 348,000. The latter is worrying to landlords who have flooded the market with new apartments, many of which are high-end, and to investors who bought large rental portfolios of existing single-family houses during the early years of the recovery.

Winding Down the Stimulus Program
Albeit slow, growing the economy has exhibited sturdy legs. While averaging annual growth of only 2.2 percent, the 100-month long expansion following the Great Recession is now the third longest since the end of World War II. Of immediate concern is the matter of recovering the $2 trillion the Federal Reserve pumped out to stimulate the abysmal economy of 2008-2009.

The Fed was created to achieve its so-called dual mandate: maximizing employment and stabilizing prices. Its primary tool is the manipulation of interest rates to manage the amount of money in the banking system. To encourage lending and kick start growth during the ten downturns prior to 2008, the Fed responded by cutting the interest rate at which member banks borrowed funds overnight. In that and the following year slashing the overnight rate to nearly zero failed to spark a much-needed recovery. The Fed then experimented with a rarely-used tool called Quantitative Easing and often referred to as QE. While QE had been employed in Japan, this solution was new to the U.S.

How did QE work? First the Fed began pumping massive amounts of cash into the banking system by purchasing securities of various kinds from its member banks. The banks then put the proceeds from these sales to work in the capital markets. The credit which enabled the Fed’s purchases of securities was created out of thin air by fiat. The Fed also lowered the federal funds rate, which is the basis for most other interest rates; auctioned large amounts of U.S. government debt, which was used to pay for the expansionary fiscal policies authorized by Congress; and purchased mortgage-backed securities to strengthen banks’ balance sheets.

The first phase of QE began in December 2008 and ended in June 2010 when the economy showed signs of improvement. When the economy weakened two months later, the Fed stepped in with more purchases. Four more phases of QE were employed before the Fed ended QE in October 2014. This process more than doubled the debt on the Fed’s balance sheet from $2.1 trillion to nearly $4.5 trillion.

Did QE succeed? At best, the program was partially successful. Yes, the economy stabilized, confidence was restored, and the stock market rose by about 140 percent. However, as mentioned above, during the current expansion GDP has grown at a weak 2.2 percent annual rate, and inflation remains stubbornly below the Fed’s 2 percent target. Bank lending never reached intended levels. The Fed’s balance sheet is now nearly 24 percent of GDP. By comparison, Canada did not deploy QE. Its economy has performed better than ours, and the balance sheet of its equivalent to our Fed is only 5 percent of its GDP.

Economists will spend years studying QE and its utility for fighting deep recessions. The immediate question is can QE be unwound without damaging the economy? The answer is no one knows.

The Fed has announced a program that allows bonds to ‘roll off’ i.e., mature without re-investment of the proceeds. Starting with roll-offs of $10 billion per month, the planned amount will grow in a year to $50 billion per month. The target is to reduce the Fed’s balance sheet to between $2 trillion and $3 trillion. That’s still at least $1 trillion more than pre-2008.

Implementing QE in 2008-2014 lowered bond yields, stocks rose, and the dollar weakened. Logically one can hypothesize that reversing QE will cause bond yields to rise, stocks to fall, and the dollar strengthen. But no one knows with certainty.

Bottom Line: After 100 months of weak recovery, our economy may be on the cusp of much-needed higher growth. But the signals are unclear: employment is strong, GDP is rising by 3 percent, but housing is underperforming. More worrisome is the uncertainty surrounding the unwinding of QE. Can the Fed deal with any unforeseen negative results and minimize their impact if indeed they occur? We are entering uncharted waters. Stay tuned…

Sources: Thanks to the Wall Street Journal, the balance, The Economist, and CNBC for their information on QE.